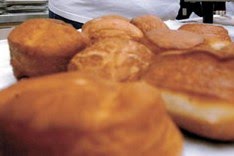 I’m not a huge donut fan. I rarely eat them. But today is donut day. Some people call it Mardi Gras (Fat Tuesday), or Shrove Tuesday, but here in PA Dutch land, it’s commonly referred to as Fastnacht Day or Donut Day. I got to thinking about this because I just told Michael that I want to go pick up a donut. “I have to eat one,” I said, “it’s Donut Day.” He looked at me with a raised eyebrow and asked “What’s Donut Day?” Oh yeah, Michael is from Florida. Duh. He’s not in the know about all our cool PA traditions. Then, I realized that I wasn’t 100% sure about the origins of Fastnacht Day myself. I only know that it’s a PA Dutch thing. I remember getting donuts at school for Fastnacht Day when I was a kid. I figured there was no spectacular explanation about why we eat donuts on Fat Tuesday. The PA Dutch are simple people. Maybe eating donuts is their way of letting their hair down before Lent. A quick search on my trusty laptop gave me the answer. Fastnacht is German for “Fast Night,” not race car fast or prom queen fast, but fast as in denying oneself of certain types of food for spiritual reasons. Basically, the PA Dutch just need to use up their lard and sugar before the fasting of Lent. Oh yeah, and something about the fastnachts preventing boils? There you have it folks. Now aren’t you glad you asked?
I am going on a fast of sorts for Lent, giving up meat and alcohol. I know. Ouch. So, if you’ll excuse me, I’m off to get a donut.