I still can’t believe I am pregnant, let alone the fact that I am inching my way out of the first trimester. I guess I should be a good mommy-to-be and start recording some of my experience. A co-worker asked me the other day if I’ve been keeping a pregnancy journal…talk about a guilt trip! I have done no such thing and I guess this is as close as I am going to get.

I sailed through the first few weeks after finding out I was expecting. Morning sickness? What’s that!? I felt fabulous! Maybe I was still coming off of the initial high or maybe the hormones hadn’t kicked into full gear yet, but I was feeling great. Little did I know what was lurking around the corner…

I’d say around week 7 or 8 was when the nausea started, and the food aversions, and the super sonic sense of smell. I could barely make it through Michael cooking a meal. God bless his heart, he took such good care of me, cooking me meals and taking care of everything while I laid like a zombie on the couch every evening. But after smelling a meal cook for a half hour or so, I was so nauseated I could barely bring myself to eat it. I couldn’t even handle hearing suggestions for things to eat. Most of the food I liked to eat (bacon) became repulsive to me. This was a very discouraging time for me because, I have to admit, I am a huge baby when it comes to being sick and I was afraid it was going to last forever. How could I possibly take care of a baby if I can’t even drag myself out of bed?! I didn’t even take any pictures during this time because I just couldn’t bring myself to do it.

Then week 10 arrived and with it, new hope. Maybe this wouldn’t last forever after all. I started to feel better, have more energy, gain back my appetite and my super sniffer dulled a bit. I still couldn’t handle the smell or sight of bacon, though (bummer). I heard rumor of the “10 week teaser,” the week of feeling better only to be followed once more by crippling nausea. I was determined that would NOT happen to me. And for the most part, it hasn’t. 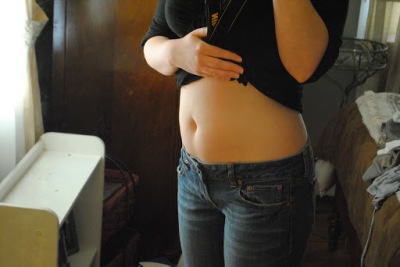 I am about 12 or 13 weeks along now (depending on who you ask) and I have good days and then some not as good days, but I am feeling much better for the most part. Now the challenge is to keep something small in my belly at all times, or it gets aggravated. Fortunately, I haven’t gained any weight, but I am definitely noticing my belly starting to make an appearance.

Now, my doctor wouldn’t even see me until I was at least 9 weeks along, so I had my first appointment on May 20th, which was basically just an interview, lots of questions about family health history, etc, etc. At that time, they set me up with another appointment on June 3rd for a physical exam and a Nuchal scan, which is a screening for chromosomal birth defects, such as Down Syndrome. The scan involved an ultrasound, so we got to see the little squirt on the big screen and then the midwife let us hear the heartbeat. How amazing to finally get to see this tiny person whose been making me so sick. Michael and I were nothing but giant smiles as we watched our baby squirm and wiggle on the screen. S/he even rolled over and waved at us! The midwife changed our due date to December 13th, which is awesome because 13 is our number! However, the ultrasound put us a little behind with a due date of December 19th, which I think is more accurate, due to my body’s weird little quirks. No matter, the baby will come whenever it is good and ready. I will see the doctor monthly now, with my next appointment on June 30th and hopefully another ultrasound at the end of July or early August. 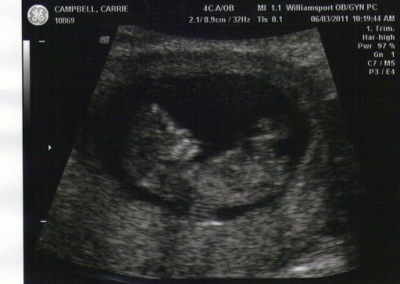 Michael thinks the baby bears a slight resemblance to Elvis in this one.