When I found out I was pregnant, I decided on a few things pretty early.  I knew I wanted to breastfeed (or at least give it my best shot), I knew I wanted to raise the baby with a primal diet (and would have to do a lot of research about how to do that), and I knew I wanted to use cloth diapers.  I’m not sure how I stumbled upon the idea of cloth diapering.  After all, my mom cloth diapered us and I remember wet, stinky diapers, big, scary pins, and rubbery pants that couldn’t possibly allow for much air to circulate around our little tushies.  And I knew I wasn’t going to do THAT.  But somehow I was reintroduced to cloth diapering through the internet and the idea seemed a little more appealing than cloth diapering of the past.  Diapers these days are very different from the ones my mom used on us and as I began to research, I became completely overwhelmed….and fell completely in love.  I was bombarded with pictures of adorable babies with cute little diapers in a variety of colors and patterns.  They seemed almost more like fashion accessories than diapers.  The thought of saving money in the long run, not filling landfills with thousands of plastic diapers, and sparing my baby all those chemicals against her skin was pretty appealing, but at the same time I wondered if I would be able to pull it off.  Extra loads of laundry, special washing instructions, and the up-front cost seemed a little daunting, but the more I read, the more I wanted to try it…and I somehow got Michael to agree to it too.

I did a lot of research to figure out which kind to buy and it was overwhelming.  I found this comprehensive list which sort of explained it all.  I decided to buy a few of several different kinds so that I could try them and see which would work the best before investing a lot of money in one type or brand.  Fortunately, I was able to buy some second hand from a local mom and on eBay.  I bought some new prefolds from Amazon with Thirsties covers, second hand from eBay (like the kind my mom used, except a much cuter cover and no pins needed), some new Sunbaby pocket diapers (they are so reasonably priced there was no reason to buy them used), and some second-hand bumgenius pocket diapers.  I didn’t want to go too crazy, since I wasn’t sure which ones I would like and which would fit my baby the best.

For the first few weeks after Evelyn was born, we used disposables.  She was a tiny baby and the diapers I had bought were too big for her.  Even though I was really excited about the diapers I had, I was still a little apprehensive about actually using them.  Would they leak?  Would I like them?  How in the world am I going to find time to do the extra laundry?  With the disposables, it didn’t take long for her to develop a red bottom and she would scream and hold her breath every time I tried to wipe her with disposable wipes.  So I guess our first step into cloth diapering was actually switching to cloth wipes.  Instead of the store bought wipes, we started using a wet baby washcloth and her diaper rash cleared up right away.  Eventually, I started to slowly experiment with the cloth diapers I had.  We started with prefolds and covers and now we have moved on to using pocket diapers almost exclusively.  They are easy for Michael to use and keep her bottom drier than the prefolds. 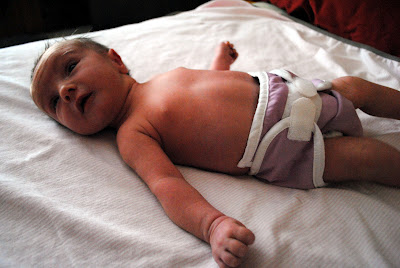 So, now that I have been using them for awhile, what’s the verdict?  I love them!  They are much easier than I ever thought they would be and now that I have a big enough stash, we don’t have to worry about running out of clean diapers as quickly.  Using disposables for a month made me realize how quickly we would go through them and how much trash we created.  It kind of solidified my decision to do cloth.  One danger I have discovered is that they are truly addictive.  I find myself perusing the internet, looking for deals or ways to make diapering easier.  At the same time, since I have found some that I really like (the Sunbabies, which are also very fairly priced) and most of the other brands are so much more expensive, I am not too tempted to buy them at full price. 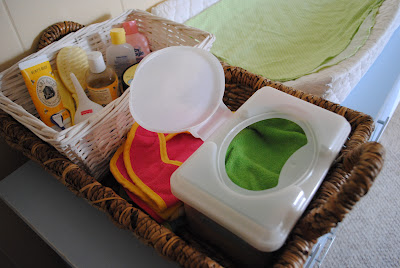 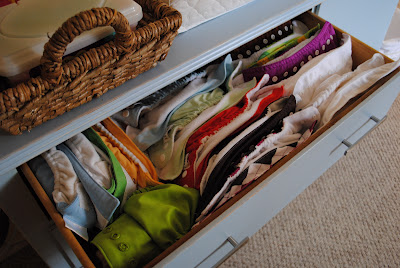 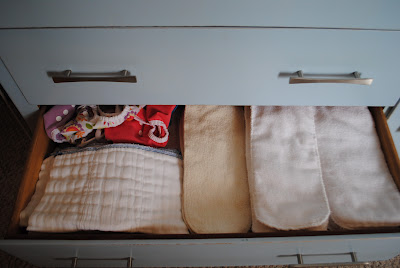 Prefolds with covers and extra hemp and microfiber inserts

I think most people don’t realize that cloth diapering has changed so much.  When I tell people that’s what we are doing, they kind of look at me like I’m crazy, but we really love it.  Well, maybe I can’t speak for Michael, but I love it.  It’s really not much different from disposables, except that I wash the diapers instead of throwing them away.  The initial investment was a little bit pricey, but I bought some extras that weren’t absolutely necessary, like extra smaller inserts for the pocket diapers and extra hemp inserts (because I wanted to try them out).  In the long run, it’s going to be so much cheaper than disposables.  I can use them on my next baby and sell them when we are done if they are still in good condition.  If you are considering cloth diapering, or know someone who is, give it a shot!  There are tons of great resources on the internet to help you figure it out.