A few years ago, I posted about my dollhouse.  When I was about Evelyn’s age, I got a dollhouse for Christmas.  Despite the fact that it’s not in it’s pristine original condition, I have been hanging onto it for roughly 35 years.  I can’t even believe I am typing that number.  Makes my head want to explode.  Anyway, I always imagined that one day, I would refurbish it and give it to my own child. Since Evelyn is almost 4, I decided that I have been procrastinating long enough.  This will be the year that I give her my dollhouse.

I started ordering the furniture long before I started working on the house itself.  I chose some sturdy wooden furniture made by Hape.  I wanted the pieces to be durable and appropriate for a preschooler’s hands.  Sure, I love the elaborate dollhouses with delicate Victorian style furniture, but I wanted her to be able to really play with this.

I think I had originally planned to take my time and work on it slowly.  Yeeeaaahhh, that didn’t happen. I am a master procrastinator.  I started working on it approximately one month ago.  I removed the wallpaper and discovered that the walls are a little rough.  I bought some wood filler to try to smooth out the texture of the wood a bit, but soon discovered that working in the tiny spaces was challenging and I didn’t have enough time or patience to bother with it.  So, I just started painting.

At one point, I invited Evelyn to help me work on it.  I showed her how to dip her paintbrush just so to prevent drips from getting on the carpet. Even though we had a moment when she came close to tears after she accidentally started painting the floor instead of the walls, we mostly worked side by side and just chatted about our work.  I told her how I had received the dollhouse when I was her age and that I had been saving it just for her for 35 years.  I told her how I was going to paint the walls to make it look like our house and she started to verbally plan out the rooms.  She even wanted to add a toilet to the basement, just like we have.  I knew that I had made the right decision to invite her to help when she told me, “I love helping you, mom.”  All the dreams and plans I had for this dollhouse were right there in that little statement.

So basically, I just painted all the walls, reattached the borders around the windows and doorways, and gave the exterior a good coat of paint.  The dollhouse used to have a balcony and a staircase. The opening where the staircase used to be left a huge hole in the floor, so I got the idea to cover the hole with carpet to make better use of the space.  Now, I am not so sure that I like the look of the thick carpet, so I might eventually try to rebuild a staircase and try some different materials for the carpet.  I would also love to try to rebuild the balcony someday, but for now the master bedroom has a big doorway to nowhere.

Once I finally got everything painted and felt like I was close to being finished, I started looking at dollhouse tutorials on Pinterest.  That opened a huge can of worms.  The possibilities are endless and I had no idea.  After seeing some of the beautiful dollhouses out there, I am almost embarrassed to post pictures of my own.  I decided that I just had to at least add some wallpaper and some little artwork on the wall.  Eventually, I would also love to make some curtains and add some other little touches.  I imagine this is something that Evelyn and I can do together for as long as she is interested.

It’s not perfect.  I wish I would have started working on it sooner and done a little research ahead of time, but I know she will love playing with it and we can make changes to it as often as we want.  I was already looking for tutorials on how to make a little Christmas tree!

The pictures are a little dark…it’s hard to get in all those little corners, but without further ado…

That room at the top was my nemesis last night when I was trying to wallpaper it at the eleventh hour.  I could not get the paper to stick.  I will eventually have to pull it out and start over.  Maybe we’ll turn it into a nursery or a game room.

The dining room….  I think this one is my favorite. 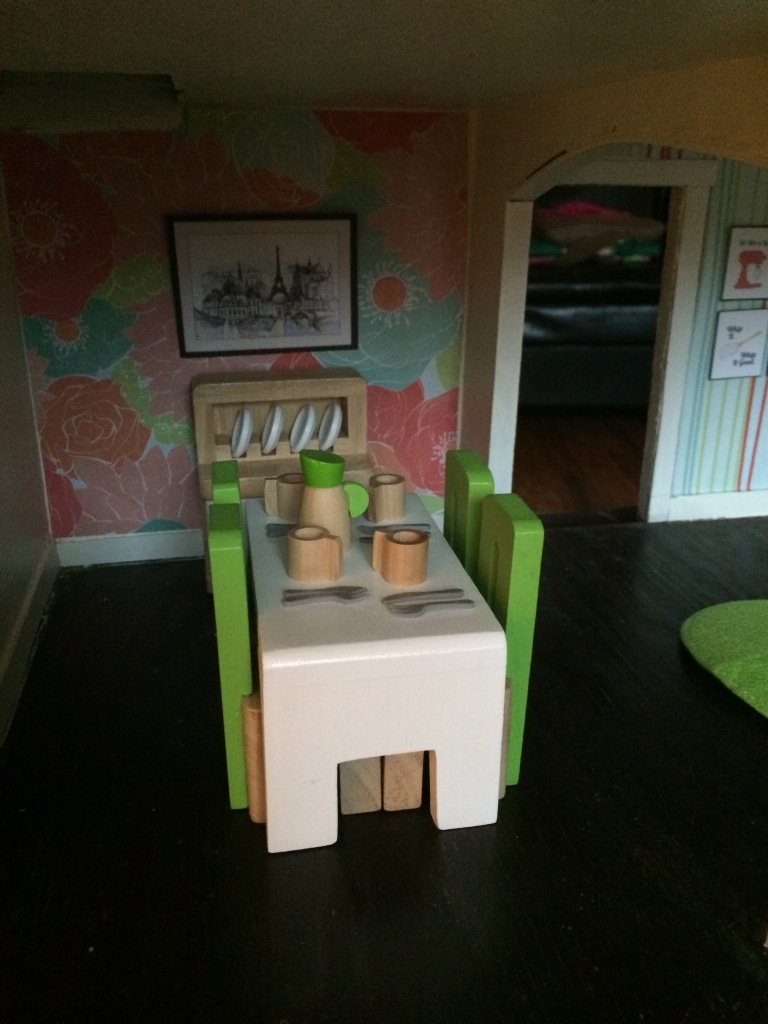 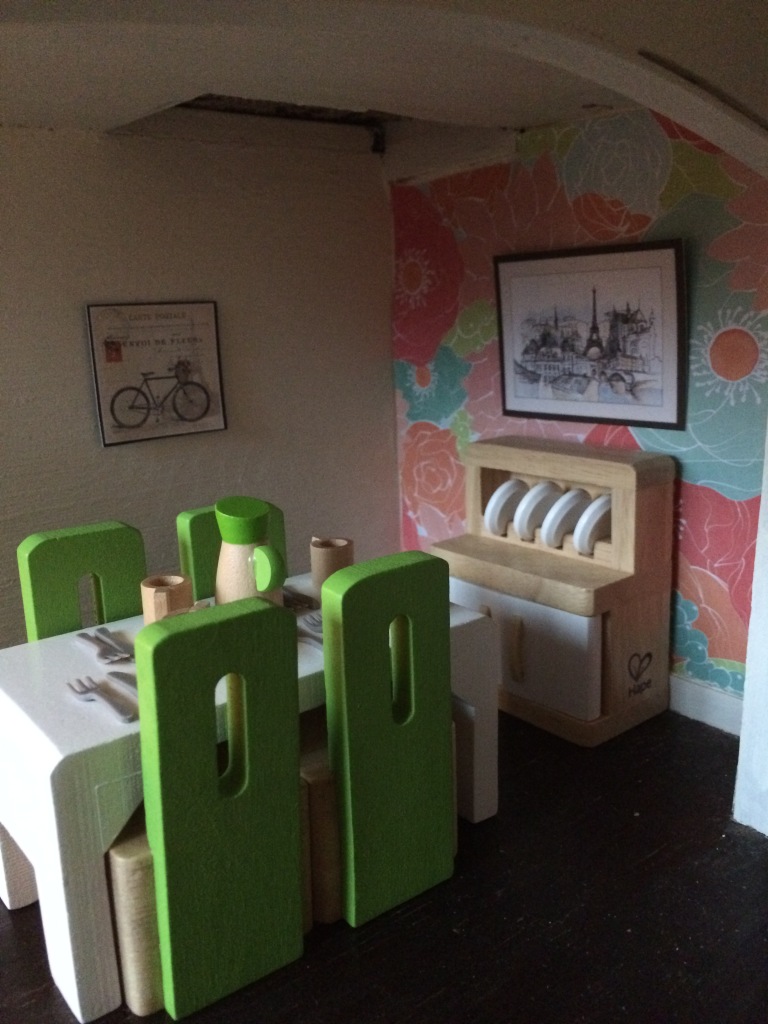 The kitchen….   I had a blast picking out little pictures to hang on the walls.

The bathroom was one of my biggest challenges.  It’s the narrowest room in the house and the furniture doesn’t fit very well.  We probably could make do with just the tub and no shower, but the set came with both. 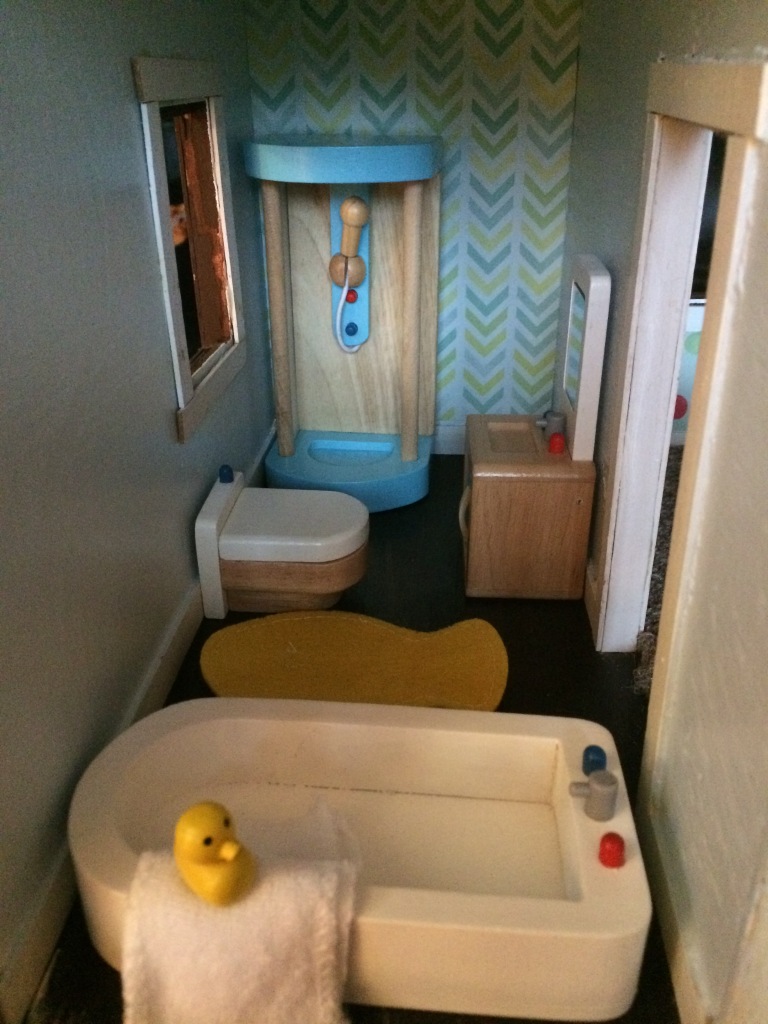 I think it’s safe to say my girl loved it.  Now, I wonder who’s going to play with it more??